There’s a lot of confusion about the cannons used by the Texian forces at the Battle of San Jacinto.

Let’s see if we can clear up a bit of it.

At the outbreak of the Civil War, there were four sets of cannons thought by the parties that possessed them to be the guns used at San Jacinto.

How is that possible?

After the the Texas Revolution, newcomers flooded into Texas. The Texas Army and home-guard were largely made up of men who had been elsewhere during the revolution. It’s not surprising that more than one artillery company thought they had the San Jacinto guns.

What happened to the real twins, the ones used at San Jacinto?

That’s a fairly straightforward tale, one well documented by James Woodrick in his excellent book Cannons of the Texas Revolution (you can get it from Amazon.)

In short, the San Jacinto twins were at Austin from 1841 to 1865, when they went with Rip Ford to the Rio Grande and where they may or may not have been used at the Battle of Palmeto Ranch. They ultimately fell into the hands of the Federals at Fort Brown when the war ended. From there they were most likely sent back east and scrapped.

Here I’m going to explore what happened to another set of twins, brass six-pounders erroneously thought to be the San Jacinto guns.

These are the guns eighteen-year-old Henry Graves and company spirited away from the Harrisburg depot and buried in August of 1865. People have been trying to dig them up since the 1890s.

Back story:
From 1840 to 1862, a pair of brass six pounders sat on a corner of Market Square in Houston.
This clipping from Joseph Milton Nance’s Attack and Counter-Attack – The Texas-Mexican Frontier, 1842 explains where they came from. 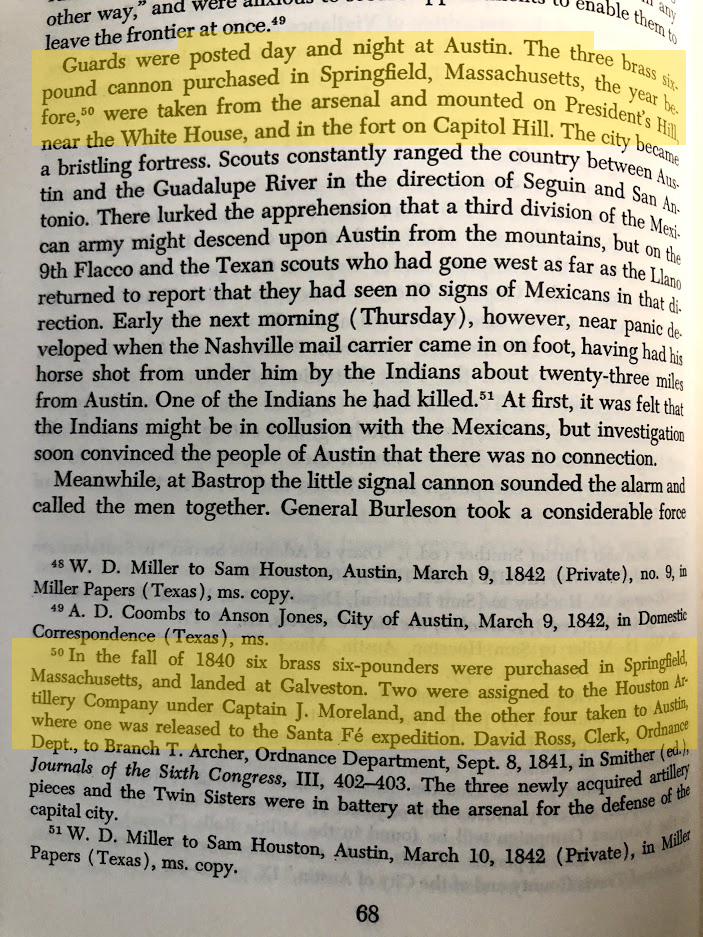 The clipping below is from an 1858 issue of the Houston Telegram. It shows people in Houston believed they had the San Jacinto Guns. (The writer was obviously wrong about the purchase date, given what we know from the clipping above.)

Dr. S. O. Young knew these guns well. He grew up in Houston during the 1850s. He and other boys used them as playthings. Boys were allowed to be boys then.

The inscription to the Houston twins is something a proud company might add to their guns in honest ignorance. Those two guns, as we learned in the Nance clipping, belonged to the Houston Artillery Company. That company was ordered to Fort Eagle Grove in 1862. That was an earthen-works fort located on Galveston Island at the end of the railroad bridge.

Though I can’t locate any records stating the fact, it is unlikely the company left its field pieces behind in Houston when it went to Galveston.

At the end of the war, the task of rounding up all the Confederate artillery fell to Captain Seymour Howell. The following inventory shows two brass six-pounders at Galveston. These are likely the Houston twins.

It’s my hunch that all the smaller guns listed above are what Henry Graves and his companions found at the Harrisburg Depot in the summer of 1865.

Jesse Ziegler reprinted this extract from Grave’s memoirs in his 1938 book, Wave of the Gulf.

How he did he recognize them as the Twin Sisters? This detail is from the account Dr. Graves gave to the Houston Post in 1909.

Notice he does not mention plaques. He describes the identifier as “the inscription on them.”
Dr. Graves was an educated man and used words precisely. He says here the markings were inscribed on the guns, which matches Dr. S. O. Young’s description of the guns that sat on Market Square in Houston during his boyhood, the guns of the Houston Artillery Company.

So let’s examine Dr. Grave’s story above. They burned the woodwork and threw the carriages in the bayou. By carriages I believe he is referring to the the iron-work that “carries” the cannon upon the wooden carriage.

They then rolled the guns 400 yards into the woods.

Have you ever tried to roll something slightly conical? It doesn’t want to track. Now imagine the thing you are trying to roll weighs 700 pounds and has a six inch trunnion sticking out of each side.
Could you roll it four hundred yards?

I reckon four able-bodied men could do the job. They could even do it twice.

But those trunnions are going to tear up the ground and the weight of the cannon is going to flatten any vegetation AND the earth beneath it.

There’s a guy nobody has talked about.

Some Yankee, possibly Captain Seymour Howell, was responsible for every cannon sitting at that depot. They were inventoried, and if two went missing he would have to answer for it.

There is NO WAY Federal forces would allow two pieces of artillery to go unaccounted for.

I’ll bet there was a panic as soon as they took inventory again, followed quickly by the discovery of the path left by rolling the cannons and the shallow graves of the guns themselves.

The guns were probably back at the depot in short order with everyone cussing the “damned Rebs.”

That’s why Dr. Graves couldn’t find them when he went back in 1920 and why every other effort to locate them has failed.

This brief notice appeared in the Houston Telegraph on September 1, 1865.

What do you think? Have I found the Twin Sisters?

Why historians are wrong about the Battle of San Jacinto

Thunder & Cereal on the Caprock

A Boy and His Gun